The Siege of Calais tells the moving story of the citizens of a war-torn city clinging desperately to hope as the enemy closes in. At the center of the drama is Aurelio, the mayor’s son. He and five other citizens eventually agree to the invading king’s terrible bargain: they volunteer to exchange their lives for those of their compatriots. 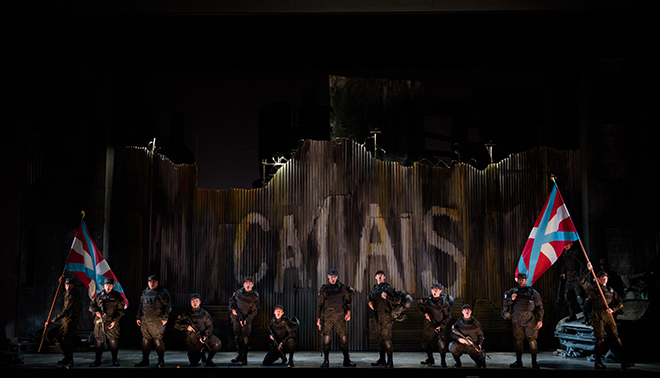 The specifics of Glimmerglass’ production of Siege are shrouded in ambiguity.  The name of the enemy and the year in which the war takes place are left to the audience to decide. Similarly, from the moment the curtain opens, the gray walls that protect Calais, the crumbling buildings and the murky lighting amplify the element of uncertainty that comes with living under siege. Yet the subtle details prove that this city is not as grim as it appears.  When the neighborhood woman pray to be saved, for instance, the light around them burns a passionate red.  The flags, though tattered, pop against the stoic façades of the ruins.

In other words, faith, patriotism, and hope fill a grey world with color. 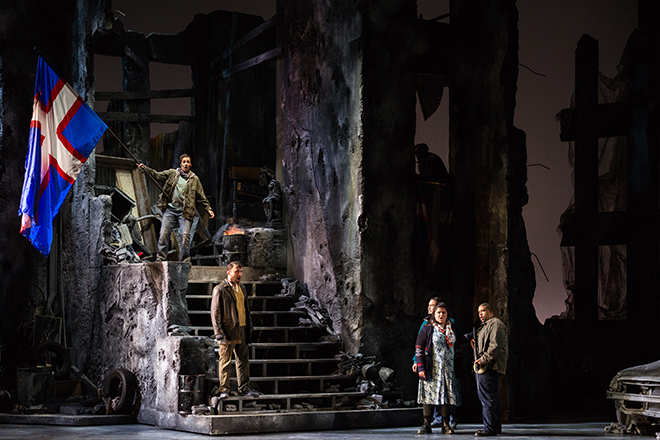 From the opening scene, it is clear that what Calais lacks in resources it makes up for in spirit. Pieces of people’s lives are littered throughout the destruction, from tattered clothes to an abandoned teddy bear.  Members of the ensemble carry mismatched luggage and make feeble homes in nooks and crannies.  Once-glorious flags hang limply across the skyline.  Yet amidst the devastation, an undeniable hope is present, embodied by the ensemble. With their city crumbling before their eyes, it seems that these starving people would be all too willing to surrender to their oppressors.  But rather than submit, the scrappy little army, brandishing pipes and bricks and broken glass, stands up for their city, ready to lay down their lives. “Though we are victims of our cruel fate,” the citizens proclaim, “we are still patriots.” They refuse to give in to the hopeless grey. 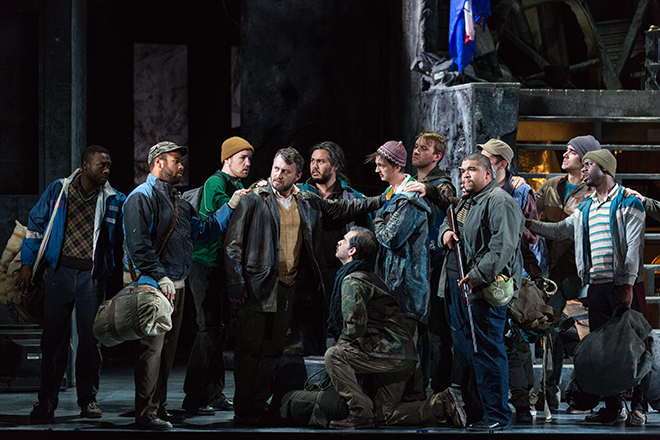 We tend to have selective memories when it comes to history.  Martyrs like Aurelio and rulers like King Edward III and Queen Isabella stand out in our minds, black and white in a world of grey, but the everyday people finding hope among loss cannot go unnoticed. When Aurelio recalls a nightmare when he witnesses his son’s murder, he exclaims, “Oh, what a moment!” The fight for Calais is only a small piece of a much larger conflict, but this opera reminds us that to those who lived through it, it was so much more.  The Siege of Calais eliminates the grey spaces created by history, and gives the audience a vibrant story of a people willing to die for their homeland.  And while their tragedy was one of many, you will leave the theater realizing that story of Calais was so much more than just another moment.