Early in Cherubini’s opera, Jason and his Argonauts present Glauce, princess of Corinth, with the Golden Fleece. Although the libretto doesn’t differentiate between members of the male chorus, director Michael Barker-Caven assigned  each of the chorus men an Argonaut persona to help them enter into the spirit of the piece.

As the story goes, Jason was deprived of his rightful throne by Pelias. When he showed up to claim it, Pelias told him he must first retrieve the Golden Fleece. When Jason set out on the quest, he assembled a group of heroes to sail with him on the ship Argo (hence the name Argonauts). The Argo was no cruise liner; this lovely trip consisted of dragons, huge cliffs that squashed anything that tried to pass between and a slim chance of living to tell about any of it. So, who are these guys who risked their lives, all so Jason could take his rightful throne from Pelias? Let’s take a moment to meet some of these burly men.

Jason: The leader of the pack—he’s on a quest to get his throne back.

Heracles: Let’s just let Odysseus tell us about this son of Zeus:

And next I caught a glimpse of powerful Heracles—

Acastus: Son of Pelias—clearly didn’t know what he was getting into when he sailed with Jason. Upon their return from Colchis, he wasn’t too happy when Medea got his sisters to cut Pelias into pieces and boil him.

Asclepius: Jason was smart to bring this guy, the god of healing, along on his voyage. Son of Apollo, Zeus eventually had him killed after he got so good at his job that he raised someone from the dead. He didn’t want the immortality of the Gods to become blasé. 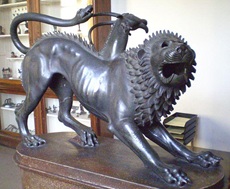 Bellerophon: The greatest warrior before Heracles came along. He was famous for slaying the fire-breathing monstrosity that is the Chimera (left). Yes, that’s a head of a lion, a goat jutting out of her back, and she’s got a serpent for a tail.

Castor: The mortal twin of the Gemini twins born of Leda. He and his brother’s excellent horseman and hunter skills made them a handy pair on the Argo’s crew.

Deucalion and Iphitos: They were Kings of Crete and Phocis, respectively, before the Trojan War. Iphitos’ sons led the Phocians in that battle.

Meleager: His claim to fame was slaying the Calydonian Boar, a giant swine sent by Artemis to ravage the region of Calydon.

Nestor: King of Pylos, he helped fight the centaurs and slay the Calydonian Boar.

Telamon: Like Heracles he was a great warrior and a strong man— killing monsters sent by Poseidon can give you that reputation. He and Jason actually butt heads quite a bit on the Argo.

Even with this all-star cast, and 20 others including, allegedly, Hercules who joined later, Jason still needed Medea to help him complete the three tasks ordered by King Aeetes, current Fleece owner, before he could claim it as his own. Shot by Eros’s arrow (Cupid for the Romans), Medea, the King’s daughter, fell in love with Jason.She gave him fire-retardant ointment for those pesky fire-breathing oxen, endowed him with battle tricks and helped him lull and kill the sleepless dragon that guarded the Fleece. She even murdered her brother so they could escape Colchis and get back to Iolcus. And what does she get in return for her aid and sacrifice? Zilch. Like Medea says herself in Act I of the opera: “Despite everything she did for him, her husband gave her…Ungratefulness!”

One Thought on “The Argonauts: To Colchis and Beyond!”