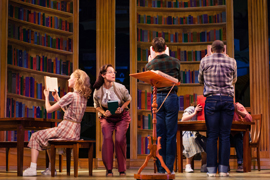 Come October, The Glimmerglass Festival brings its acclaimed production of The Music Man to Oman, a country located on the Arab peninsula between Saudi Arabia, the United Arab Emirates and Yemen.  The recently-established Royal Opera House in Muscat, the capital city, will host the company for a four-performance run.

“As the trip gets closer, we’re all getting more excited,” said Abby Rodd, Director of Production.

While costumes and sets from Glimmerglass productions are frequently rented out, the company has never before toured a production.  This inaugural trip will include more than 100 company members, with artists, musicians, and members of the production staff.

The company will travel in three waves.  First to depart are the performers, who will attend rehearsals in Oman before performances begin.  Production staff will arrive next to prepare the stage at the opera house.  The musicians––who take part in final rehearsals––will make up the third and final wave.

Then there’s the set.  With a 29-day ocean voyage from New York City to Muscat––plus the time needed to go through customs––to ship the original set would have been impossible.  To enable an earlier departure, an exact duplicate of the scenery currently onstage in Cooperstown was constructed and packed in shipping containers for the month-long trip.

Keep an eye on the Glimmerglass Blog for updates from abroad.

3 Thoughts on “Glimmerglass Brings "The Music Man" to Oman”