Sunday, May 19, marks the opening of The Festival of American Romantics, a collaboration between historic Hyde Hall, the Fenimore Art Museum, and The Glimmerglass Festival, a shared exhibition of period art, literature and music that explores the ideals of the Romantic Movement. The first event, The Picturesque, features readings from American Romantic writers James Fenimore Cooper and his daughter Susan Fenimore Cooper, as well as performances of poetry by Emily Dickinson set to the music of Heggie, Gordon and Copland.  The texts describe the particular beauty of the natural landscape as it moves from the brittle cold of winter to the freshening softness of spring.  Guest artists Jacqueline Antaramian, Dan K. Kurland, Beth Lytwynec and Drew Taylor have performed with companies such as The Glimmerglass Festival, Fort Worth Opera and Manhattan Theatre Club. On May 19 the performance begins at 5:30 p.m., and the evening concludes with a reception in the grand entrance hall of Hyde Hall, an expansive English-style country house built on the shores of Otsego Lake in the years between 1817 and 1835.

The drawing room of Hyde Hall is an elegant and intimate setting for this three-concert series. The final two Hyde Hall performances of The Festival of American Romantics will feature the theme of Utopia and Free Love on June 23, with Melody Moore and Peter Volpe, and Radical Democracy on July 7, with Patricia Schuman and David Pittsinger. 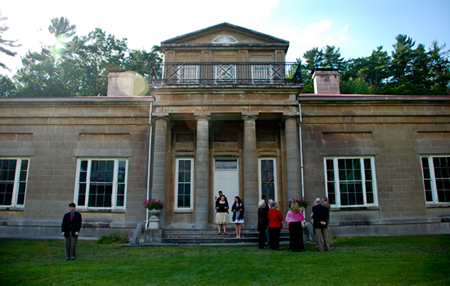