COOPERSTOWN, N.Y. — With The Glimmerglass Festival’s 2019 season approaching, the Cooperstown-based opera and musical theater company has announced programming for 2020, as well as the 2020 Festival’s pair of Artists in Residence.

The 2020 Glimmerglass Festival’s mainstage productions will include Rodgers and Hammerstein’s The Sound of Music, Mozart’s Don Giovanni, Wagner’s Die Feen (The Fairies) and Handel’s Rinaldo. Selections for the season serve as a survey for the development of these famed creators, with the slate featuring formative operas from Wagner and Handel, as well as masterworks from Mozart and Rodgers & Hammerstein.

The Festival will also feature the world premiere of the youth opera The Jungle Book by Kamala Sankaram and Kelley Rourke, as well as a brand new adaptation of Mozart’s Così fan tutte, directed by Eric Einhorn. A compact, contemporary take on Mozart’s opera, Così? will upend the classic battle of the sexes, exposing and examining all manner of gender stereotypes. Così? will be presented with piano accompaniment in the Pavilion.

“The Glimmerglass Festival celebrates the ideals of ‘artistic citizenship,’” Artistic & General Director Francesca Zambello said. “I believe the arts can help us forge new connections and serve as a catalyst for dialogue. For the past decade we have focused on casting our shows in a way that reflects America today — with talented performers of all backgrounds. And in 2020, we also look forward to continuing our tradition of empowering female voices, with women directing all four shows and conducting two.”

The Festival welcomes Grammy Award-winner Isabel Leonard and William Burden as Artists in Residence for the 2020 season. Both artists will star in The Sound of Music, as well as provide mentorship for the Young Artists Program.

THE SOUND OF MUSIC | Rodgers/Hammerstein II

The 2020 Festival will open with Rodgers and Hammerstein’s The Sound of Music in a new co-production with Houston Grand Opera directed by Francesca Zambello, associate directed and choreographed by Eric Sean Fogel and conducted by Music Director Joseph Colaneri.

The Sound of Music tells the classic story of Maria, a former novice-turned-governess for strict naval captain Georg von Trapp’s seven children. Maria imbues light into the lives of the von Trapp family through music, even as looming fears of a changing Europe sweep across the Swiss Alps. Classic tunes such as “Do Re Mi” and “Edelweiss” keep this story of love, music, and morality one of audiences’ favorite things more than 60 years after its debut.

Isabel Leonard and William Burden headline the production as Maria and Captain von Trapp, respectively. Leonard makes her Glimmerglass debut after turns at the Metropolitan Opera as Blanche in Dialogues of the Carmelites, Mélisande in Pelléas et Mélisande and as the title role in the world premiere of Nico Muhly’s Marnie. Leonard has also appeared as Rosina in The Barber of Seville at Washington National Opera and as the title role in La Cenerentola at the Lyric Opera of Chicago, among other engagements. Burden returns to Glimmerglass after serving as the 2017 Artist in Residence and appearing as Andrew Carnes in Oklahoma! and Justice Scalia in Scalia/Ginsburg. Newly appointed as a member of the voice faculty at The Juilliard School, Burden created leading roles in many major works of the 20th and 21st centuries, including An American Tragedy, Heart of a Soldier and Silent Night, among many others.

The productions runs July 11 through August 25.

Don Giovanni returns to the stage of the Alice Busch Opera Theater in a new co-production with Seattle Opera directed by Brenna Corner and conducted by Lidiya Yankovskaya, Music Director of the Chicago Opera Theater.

In this tale of retribution rather than revenge, womanizer Don Giovanni abuses all who cross his path, both the men he employs and the women he encounters. Mozart’s masterful score captures the story’s shifting moods — from comedy to passion, menace to tenderness. Da Ponte’s libretto shows how the antihero’s choices create a toxic atmosphere in which no one is safe.

“It’s not like only one woman is being affected,” Corner noted. “Every human on the stage, male or female, is an object of this man’s abuse — whether sexual, psychological or emotional.”

An alumna of Glimmerglass’ Young Artists Program, Corner’s collaborative efforts with the Festival continue after serving as the director of Scalia/Ginsburg and the youth operas The Odyssey and Noah’s Flood. Currently, Corner serves as the artistic director of the Fraser Lyric Opera and the Manitoba Underground Opera in Winnipeg, Canada.

Yankovskaya is particularly excited for her Glimmerglass debut, as after emigrating from Russia as a child, she attended high school just 45 minutes from the Festival’s Cooperstown campus. Now, Yankovskaya is the Music Director at the Chicago Opera Theater, and is the only woman to hold that title in a multimillion-dollar opera company in the United States. She also founded the Refugee Orchestra Project, which promotes the cultural and societal relevance of refugees through music.

“As women’s rights continue to evolve, I’m particularly interested to see what perspectives our all-female team will bring to this story of a sexual predator and his victims,” Yankovskaya said.

Louisa Proske directs and Erina Yashima conducts a new production of Handel’s Rinaldo. The Festival is known for its interpretations of Baroque operas. Rinaldo will be the ninth Handel opera presented in the company’s 45-year history.

In the story, warriors and sorcerers greet Rinaldo as he enters a fantastical world where he faces conflict, victory and personal transformation. Highlights from Rinaldo’s score include “Bel piacere” and “Lascia ch’io pianga,” one of Handel’s most well-known arias.

Proske is a co-founding Artistic Director of Heartbeat Opera in New York City, and earned a 2018 Princess Grace Foundation Award for her work with the company. In the 2019-2020 season, Proske directs Don Giovanni with Chamber Music Northwest and collaborates with the Metropolitan Museum, New York Philharmonic and Juilliard Opera on The Mother of Us All.

“I find a beautiful naiveté, intensity and strangeness in this opera — like in a fairy tale,” Proske said. “For me, it is less a political or historical commentary than a childlike, mythical exploration of a hero’s quest into the unknown – fighting for something he feverishly believes in and is ready to die for, braving a territory that is dreamlike, often nightmarish.”

Yashima was recently appointed as an assistant conductor for the Philadelphia Orchestra following a three-year apprenticeship at the Chicago Symphony Orchestra.

“Over the past few decades, Baroque operas have become more and more popular and that is a great asset for audience and musicians alike,” Yashima said. “It is fascinating how Handel’s music is still able to evoke the whole range of human emotions in us today as it did three hundred years ago. ”

An otherworldly romance full of fairies, demons and princes, Die Feen brings fantasy and whimsy to the stage. Despite all odds, a mortal prince and a high-ranking fairy begin a romance that causes chaos and suspicion across their different worlds. The score and libretto elucidates the promise of Wagner’s future compositions, showing signs of what would later become his signature sound.

“The seeds of the many great operas to come are sowed in this work,” Colaneri said. “In it we hear Wagner’s Italian bel canto based melodic exuberance and his pioneering development of the dramatic lyric voices that form the central core of his operatic style. The opera is at once personal in its expressive solo vocal passages and flamboyant in its many stirring and soaring ensembles.”

While audiences may be familiar with the beloved story of an endangered human cub who seeks refuge with a pack of wolves, Kamala Sankaram and Kelley Rourke’s retelling of The Jungle Book casts a girl in the central role of Mowgli, alongside the lovable Baloo and menacing Shere Khan. The Jungle Book will feature the Glimmerglass Youth Chorus, joined by members of the company’s Young Artists Program, with piano accompaniment.

“Classical music in India, like European classical music, has a very rich tradition, its major forms dating back to the 16th century,” Sankaram said. “Indian classical ragas (akin to modes) serve as the building block of a piece and also convey specific moods, such as happiness, devotion, and sorrow. It is my hope that borrowing equally from the traditions of Indian and European classical music will not only serve to create a sense of place within the opera, but will leave our young artists with a greater sense of the world and the commonalities shared between cultures.”

Casting, events, concerts and guest appearances for 2020 will be announced in the coming months. For more information, visit www.glimmerglass.org.

Subscriptions can be renewed for the 2020 season beginning July 14. 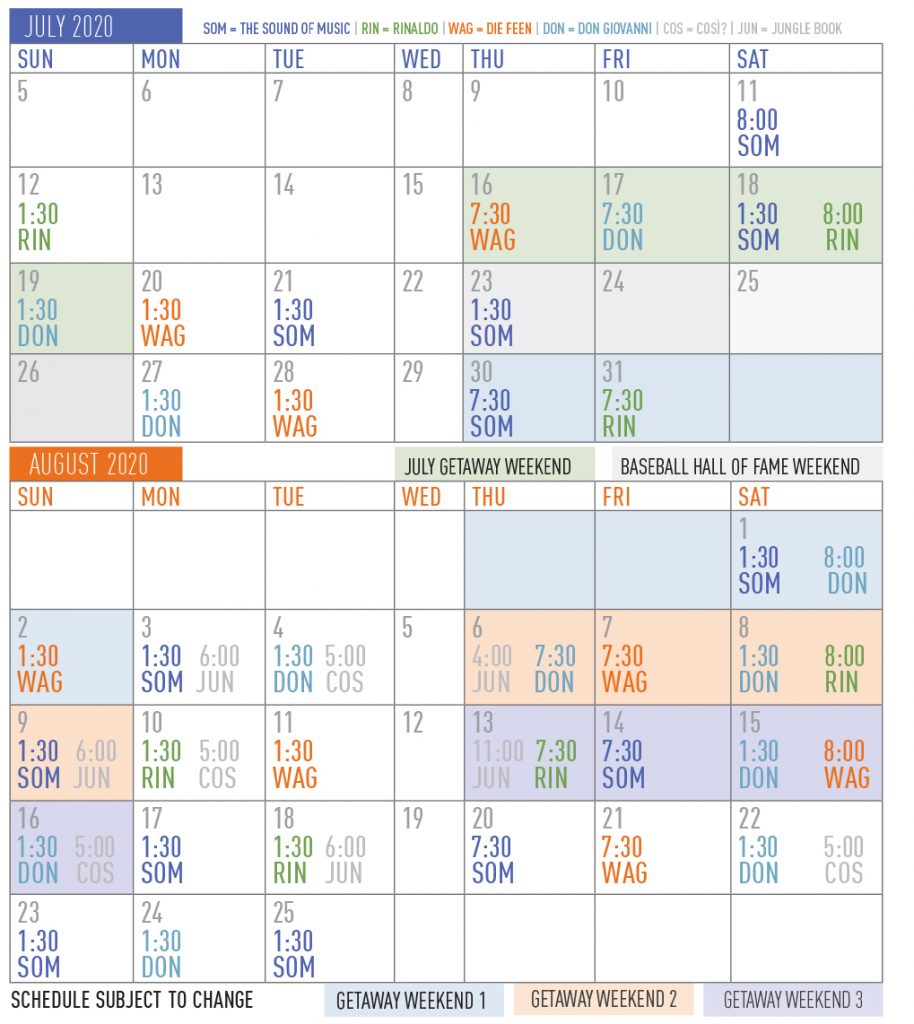