> Blog > 2022 Festival > The Power of the Pack at The Glimmerglass Festival
Share page:

As children and their families entered the theater, it was clear the outreach and connection with local youth has grown stronger each year since The Glimmerglass Festival premiered its first youth opera in 2015. The youth opera is written with young audiences in mind and performed by children. Now, at the 2022 Festival, the company premiered the sixth youth opera in a season where every single production also involves kids. 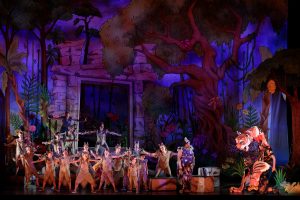 The Jungle Book premiered on August 4 and marked the first youth opera to be performed on the mainstage in the Alice Busch Opera Theater. Composed by Glimmerglass Composer in Residence Kamala Sankaram with a libretto by Kelley Rourke, who has written words for all of the Festival’s previous youth operas, The Jungle Book offers valuable lessons about togetherness and kindness. The opera uses Eastern and Western classical music styles and follows the story of a human cub who seeks refuge from the dangers of the jungle with a pack of wolves.

There are more than 20 local children in The Jungle Book, ranging from ages 7 to 17. Lily Grady, 17, who performs the role of Mowgli is a Cooperstown native and appreciates the opportunity to perform alongside professionals.

“…professionals from all over the world come into this tiny little town and they all have so much knowledge and so much skill,” Lily says. “For me personally, it gives me an idea of what I might want to do, where I might want to go to college or what I want to do next.”
The Jungle Book isn’t the only show featuring a group of young performers. The Sound of Music cast includes six kids performing as members of the von Trapp family. Carmen, Tenor Overboard and the Double Bill each have at least one youth performer, and several shows have local adults as well. The opportunity for kids to perform at Glimmerglass opens a door for those living in rural areas to experience and participate in the arts each summer. 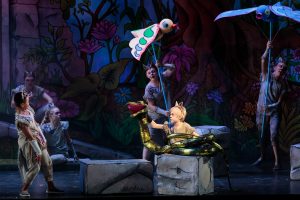 The children begin rehearsing for the youth opera in late spring, beginning with music rehearsals and then moving into staging rehearsals with the director. With the youth ensemble having such a wide age range, the rehearsal process offers a unique opportunity for the children to learn from each other.

“There can be an advantage of having people of all ages in one room learning together,” librettist Rourke said. “The older kids enjoy taking on the role of mentor, and the younger children look up to their older friends. It’s been really amazing to see some of our performers who started in the youth ensemble as young children ultimately become the leader of the pack, if you will.”

The Jungle Book and The Sound of Music cast member W. Morgan Hill-Edgar has now performed in four of the youth operas, and is currently performing in the Festival as an adult.

“Doing the youth opera has been the most amazing experience in the world,” he says. “I was so lucky to be given this professional opportunity from such a young age. Words can’t properly express my gratitude to the Glimmerglass Festival for making this possible and filling my life with love and wonder. It has been the biggest pleasure to return to The Jungle Book as an adult and see these children find their love for theater. The Jungle Book is an incredible show, and I’m so happy to be a part of it with these incredibly talented performers.”

Now, as The Jungle Book closes, the success of the run reflects that Artistic & General Director Francesca Zambello’s decision to initiate a youth opera program is a testament to the Festival’s ongoing commitment to the community. It seems very fitting that Zambello’s final season could reflect what she has put in place to extend opportunities to the local people and young people who support Glimmerglass each year.

The Festival has commissioned composer Ben Morris and librettist Laura Fuentes to write next year’s youth opera. More information will be released soon.