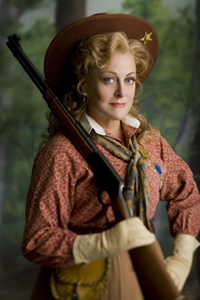 Deborah Voigt will have had her fair share of on-stage gun handling leading up to her role as Annie Oakley this summer thanks to her recent appearances as Minnie, Puccini’s Girl of the Golden West.

Minnie is a poker-playin’, motherly and endearing, bossy yet self-conscience woman. Many of those qualities are found in Irving Berlin’s Annie Oakley – that, and both women carry a gun.

After performing the role of Minnie at San Francisco Opera last summer, Voigt went on to a run at the Met this December/January. New York Times’s Anthony Tommasini wrote “She looks in her element when she appears in Act I, breaking up a brawl in her bar by shooting three rounds on her rifle.”

She has gone on to sing the role at Lyric Opera of Chicago (which may be seen through Feb. 21).  Of this portrayal, the Chicago Classical Review wrote, “Dramatically, the soprano seemed completely at home in the role whether in her hearty camaraderie with the boys in her saloon, breaking up bar fights with her six-shooter, or cheating at cards to save her man. Yet Voigt also showed touching vulnerability when conveying Minnie’s loneliness and her reawakened love for the on-the-lam bandit Ramerrez.”

While being interviewed backstage of The Girl of the Golden West during the Met’s Live in HD transmission (of which we are a proud partner), on January 8, Voigt mentioned her upcoming performances as Annie Oakley. Take a look: