Last week was electrics load-in week. The electrics crew spent several days loading the repertory light plot into the theater. This is actually a complicated process of unloading over 400 lights, hanging those lights throughout the theater, and then running thousands of feet of cable to power the lights. They then need to test and focus the lights. After several weeks of pre-planning and lots of hard work, our 12 person electrics team accomplished the task! Three days before the load-in begins, half of our electrics team travels to the rental shop in New Jersey to prep the lights for load-in. They label lights and cable, then layout and pack the truck so that the load-in goes smoothly. The trucks arrive at 8 am and the labor-intensive process begins. The electricians will hang the lights in the proper positions on the battens (counter-weighted pipes that can be raised and lowered above the stage). The photo above shows that this is no small task, with some of those lights weighing as much as 85 lbs! Lights also need to be hung in various positions around the theater. This often involves lifting the lights up on a ladder instead of bringing the pipe down to the floor. Once these lights are hung, electric and control cables need to be run to each position so that each light can connect to a dimmer. Dimmers are used to vary the brightness of the lights. These dimmers are controlled by the computer light board in the booth at the back of the theater. Some lights need to hang in difficult positions. The lights on the sides of the stage are particularly hard because they are hung 32 feet above the stage. The electricians use a personnel lift to bring the electricians and their equipment to the correct working height for the lighting position. The lighting instruments are placed in specific locations specified by the lighting designer and are indicated on the lighting plot. Here at Glimmerglass, we will be running four shows in repertory so we need to have a rep plot. A rep plot is a lighting plan designed to fill the needs of all four shows with as little changeover time between shows as possible. Lighting Director Jeff, Master Electrician Colin, Lighting Supervisors Lily (seen above) and Russell are in charge of making sure the light plot is properly installed and able to fulfill the needs of the Lighting Designers. Next these lights need to be focused, and this cannot be done down on the ground, so electricians need to go up in the lifts again. But to know where to point the light, someone needs to be on the ground for him or her to focus on. This is because the light really isn’t aimed at the ground but about five or six feet above the ground, since that is about where the performer’s face will be. During this step, color is usually added to the light, which is done by putting a thin piece of colored, translucent polycarbonate or polyester in front of the light that filters the light to the desired color. 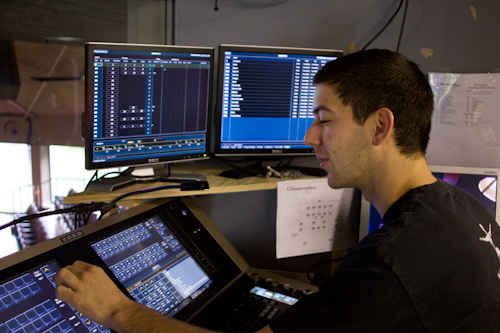 The last step in this process is to program the show into the light board. This is done through a process called cueing. A cue is a desired look for the lights during a specific part of the show, indicated by the lighting designer. The cue can be made by dimming or brightening lights, making them move or changing color — if the lights have those capabilities. It is then saved on to the light board. The designer makes hundreds of these cues. These are then played back in a specific order during the show. Cueing will take a while and will be tweaked and modified throughout the tech rehearsals. Before every rehearsal and show all these lights must be tested in what is called a channel check. During a channel check, the Master Electrician will test every light, and if any have stopped working, he then fixes them. The photo above was taken when they were testing the moving light fixtures above the stage; you can see the beams of light coming from above onto the stage.

When, at last, the show comes together and is ready for an audience, the stage electricians are rewarded by seeing all of their hard work turned into beauty on stage. It is a large task for a team of twelve to support four operas at the same time but they love their jobs and they have a great time doing it.