In Anne Bogart’s version of Carmen, the tension of the bullfight comes through in more than just the Toreador Aria. The dynamics of bullfighting is present in much of the interplay between people. Dancers and singers alike circle one another—gauging their opponent, waiting to make the final strike—tension so thick you could cut it with an Espada. 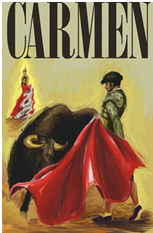 Throughout the opera we hear a lot of bullfighting jargon from Escamillo and the chorus—like Espada , the sword with which the matador “finishes everything.” A close reading of the thorough vocabulary in the libretto can help us piece together the bullfighting tradition.

The first thing to know is that Toreador (torero)—famously misused in Carmen—refers to any participant in the bullfight, not specifically the killer of the bull. Although Escamillo’s Act II aria talks about the Toreador, he’s actually describing the work of the matador (matador del toros –killer of bulls).

When the chorus is chanting “Voici la cuadrilla” they’re watching a parade of chulos, banderillos, and picadors—all assistants to the matador. Chulos have the least glamorous roleas drivers and servants to the matador. The picadors are the first to encounter the bull in the ring. Mounted on horseback, their job is to jab the bull with a lance in order to weaken it through blood loss. Banderillos are in charge of planting barbed darts called banderillas into the bull’s neck and chest to further aggravate and weaken the bull.

This all takes about 10 minutes. Mind you that a bull can calculate what it takes to kill its opponent in 15 minutes. So the clock is ticking…

Escamillo sets the scene in his aria: “…All of a sudden, people fall silent. What’s happening? No more shouts! The moment has come!” In this final act of the bullfight called the faena (from old Catalan for task or chore) the matador manipulates the muleta (cape) in order to further tire and disorient the bull. When the matador has put on enough of a show for the audience and he feels that he and the bull are on equal footing, he goes in for the estocada, the final thrust of the sword designed to kill the bull.

In Spain the bullfighting tradition has thrived for centuries. As Escamillo describes in his aria, “it is a celebration of courage… of strong-hearted men!” But like Ernest Hemingway once said “it’s a good deal like Grand Opera for the really great matadors except that they run the chance of being killed every time they cannot hit a high C.”

One Thought on “En garde!”