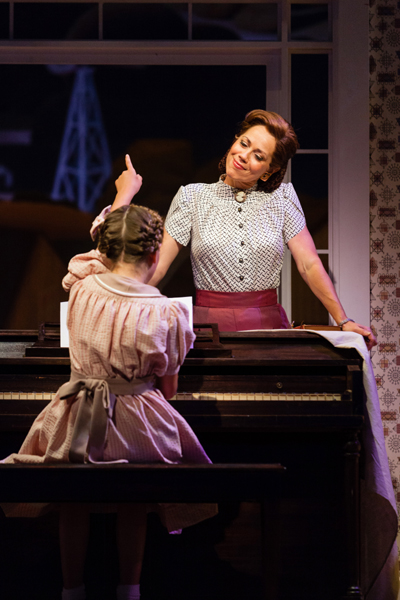 Not-so-gently informed by my chorus teacher that Josh Groban is NOT an opera singer (how I would school my 14-year-old self now!), I’m on a mission to discover what real opera is. Despite my family’s proximity to New York City and the fact that my grandmother used to be an opera singer, I have never seen nor heard an opera. Every evening, the wordless music of Wagner, Liszt and Mahler thunders forth from my father’s speakers, but when I ask him if he has any recordings of opera, he says he “doesn’t listen to that Italian stuff.” A light appears at the end of the operatic tunnel in the New York Times. In reviewing a production of Lucia di Lammermoor, Anthony Tommasini describes Lucia’s mad scene as a “tour-de-force,” and that’s what I want to hear! But iTunes, YouTube, and Spotify aren’t real words yet, so I have to beg my mother to drive me to the mall.

My mother drops me off at the entrance to a local record store before rushing off to Macy’s. I stare blankly at the windows of the store; they are crowded with a hodge-podge of media: vinyl records piled on top of one another in precariously constructed but colorful towers, faded CD jackets stuck behind cracked cases peek through hand-written posters, one advertising for local guitar lessons, another for an open-mic night, and another for a chamber music concert from five months ago. I’ve been here hundreds of times before, scouring the shelves for musicals, pop songs, and the hard rock that I pretend to like, but this “opera section” is unchartered and dangerous territory.

Flipping through the opera bins, I finally find a recording of Lucia di Lammermoor, with a welcoming face beaming across the CD cover: Beverly Sills! There’s only one problem: I don’t know Italian! How will I understand the story? A blue box catches my eye. A young woman, her face distorted in anguish, is holding a bloody knife. It’s not Lucia di Lammermoor but Lucy of Lammermoor, sung in English, with someone named Elizabeth Futral as the doomed bride. I place Bubbles aside – she and I will meet again – and take a chance on an Italian opera sung in English. (No curmudgeon has told me that this is anathema yet.)

I spent the next two weeks enthralled by Lucy of Lammermoor. I had expected Lucia’s mad scene to be something like “Rose’s Turn” from Gypsy: loud, angry, and devastating. Instead, I heard something very different: the intense quiet of Elizabeth Futral’s singing, the coloratura full of urgency, the high and low notes that were not mere vocalizes but a dramatic extension of speech. Donizetti’s lilting accompaniment, and the sepulchral sound of the glass harmonica, drew me in and captivated me. My desire for bombastic and passionate singing was soon satisfied by a recording of Turandot with Birgit Nilsson and Franco Corelli, but Lucy of Lammermoor and Elizabeth Futral taught me how to listen to the story – not just the music – of opera.

Since that fortuitous summer afternoon, I have learned Italian, French and German, mostly through listening to operas with the score in one hand and a translation in the other, but I have never forgotten how captivated I was by my first opera experience in English with Elizabeth Futral. Unfortunately, I hadn’t heard Ms. Futral live…

…until this summer when, as a summer intern at Glimmerglass, I finally heard the voice that inspired my love for opera, the voice that brought me to this moment in my life, in The Music Man. Many memories have been made this summer thanks to Glimmerglass, but the one that I treasure the most is sitting in the balcony of the Alice Busch Opera Theater, hearing Ms. Futral sing “Goodnight, my someone.”