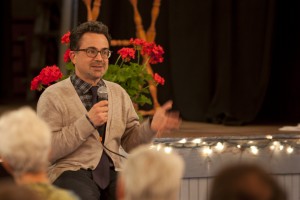 More than 50 members of the Glimmerglass Festival family came out to the Cherry Valley Artworks Star Theater on a rainy Monday evening to see the final installment of the Glimmerglass Opera Guild’s annual Talking Opera series. Currently in the process of renovation, the theater hall was lit by lines of fairy lights that gave a timeless ambiance to the old room.

The subject of this final seminar was Passions, the double-bill of Pergolesi’s Stabat Mater and David Lang’s the little match girl passion. Company dramaturg Kelley Rourke and conductor for the little match girl passion, David Moody, led the discussion in what he called “Carol Burnett Show style,” perched on stools at the front of the room, allowing the presentation to be more exploratory than expository.

As Moody explained, Lang is a product of the Steve Wright and Philip Glass generation (Knock knock. Who’s there? Knock knock…).  The presenters played several excerpts by each of these composers, as well as pieces from different eras of Lang’s work. This created a sense of the musical heritage of this season’s production of the 2008 Pulitzer Prize winning the little match girl passion.

In its Biblical context, the passion refers to the suffering of Christ. There are five passion narratives (four in the Bible and Peter’s non-canonical telling), and the musical settings of these narratives constitute traditional passions.

The little match girl passion, as the name suggests, is David Lang’s adaptation of the biblically inspired form that he loved. According to Red Poppy Music, Lang’s publishing company, “For Lang and other Jewish classical musicians, the Western vocal tradition of Christian music presents a dilemma they must confront. In the little match girl passion, Lang hoped he could turn that dilemma to his advantage.  As Lang explains, his adaptation of the Christian narrative suggests a, “religious and moral equivalency between the suffering of the poor girl and the suffering of Jesus; [in this piece] the suffering of the Little Match Girl has been substituted for Jesus’, elevating (I hope) her sorrow to a higher plane.” 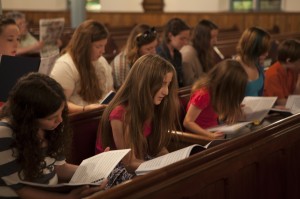 In addition to the original score, the Glimmerglass production will present the world premiere of a new prologue on the text of St. Paul (Corinthians 13:11: “When I was a child I spake as a child… but when I became a man I put away childish things”) to be sung by a local children’s chorus.

“For my text I compiled all the differing translations in English that I could find, cut them up in to phrases and I alphabetized them, creating a kind of catalog of its meaning, as it changes from translation to translation,” Lang wrote.  This process results in a progressive repetition that thematically and musically seeks completion but never achieves its goal.

“Listening to the repetition in this piece reminds me often of looking at a Persian rug or at wallpaper,” Moody said.

It communicates a solace in its surface of calm, he explained, but never relinquishes the anxiety evident in its obsessive reiteration.

This production offers several unique challenges and opportunities to those working on the project. Singers have to learn to play percussive instruments while singing, and they have to perform, not as a soloist or as a chorus, but as one voice in a quartet.

“It requires enormous vulnerability” Moody said, and it necessitates a different attitude toward performance than does, say, a Wagner opera. “The piece is about sublimating your own voice to the voice of the group,” Moody explained, which goes against most opera singers’ natural instinct.

The little match girl passion will be paired with Pergolesi’s Stabat Mater in a double bill titled Passions. The production opens July 20 and runs through August 22.  This juxtaposition of the two diverse tales creates a cohesive program that teaches the spectator, as Moody expressed, to “take into account our feelings on our suffering – on anyone’s suffering,” and to begin to “develop a joint accountability for suffering worldwide.”

It should be a beautiful production, and I hope I’ll get to show you a sneak peek soon in an upcoming e-newsletter.  If you’re not already receiving these backstage insights and would like to get in on the action, sign up here today!

One Thought on “Passion-ate about David Lang”