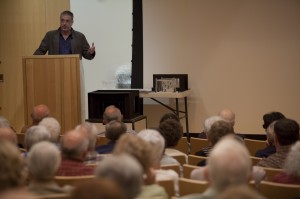 Every seat in the Fenimore Art Museum’s auditorium was filled last Monday night for the Glimmerglass Opera Guild’s third installment of “Talking Opera,” the annual free seminar series. Previous speakers this year have included Joseph Colaneri speaking on Verdi and members of the SUNY Oneonta theater department presenting on Camelot. This week, members of both Glimmerglass and Fenimore came together to share their insights into Wagner’s The Flying Dutchman and The Festival of American Romantics. The result was a diverse evening covering The Flying Dutchman in a number of contexts, from its place in the The Festival of American Romantics to its significance in its era and to the history of opera as a whole.

Fenimore Art Museum’s Vice President for Education Garet Livermore spoke first, delivering an engaging lecture on the exhibits currently featured at the museum. Among these is a collection from painters of the Hudson River School, a mid-19th-century American artistic movement heavily influenced by Romanticism. These artists are known for their sweeping landscapes and the sense of solitude that these scenes evoke.

Attendees then heard from the The Flying Dutchman’s set designer James Noone. He began working on the production last August with director Francesca Zambello.

“I wanted this production to be different – special for Glimmerglass,” Noone said as he passed around three different design models the pair had considered for the show. The first clearly depicted the mast of a ship, but, by the third conception, the form of the ship had been disseminated.

“The original conception was a little too ‘on the money,’ Noone explained.  [With the later versions] I tried to dig deeper into the poetic nature of the design.”

When prompted by an audience member’s question to further explain his move away from the extremely realistic, attendees were rewarded with an insight into his philosophy of design:

“I’m interested in a space that allows the music to be heard and the audience to use their imagination,” he said. “Often productions don’t demand anything of us. They’re called “plays” for a specific reason,” he added, smiling, “and I think we often forget that.”

Director of the Young Artists Program and Head of Music Staff Michael Heaston wrapped up the evening with a close look at the music of The Flying Dutchman and a quick Wagner 101 lesson. Glimmerglass is celebrating the bicentennial of both Wagner and Verdi’s births with its productions of The Flying Dutchman and Verdi’s King for a Day, and Heaston made resonant comparisons between the two operas, highlighting some key differences between the two musical styles.

Listening to the samples Heaston played, it might be difficult to see how these two European composers who inhabit “different sound worlds” both fit into the theme of The Festival of American Romantics.  In The Flying Dutchman “we see Wagner at the early stage of his search for the German national voice,” Heaston explained. “Verdi is doing the same thing.” Romanticism is marked by the rejection of the status-quo in favor of undertaking a search, so, given Heaston’s insight, these two composers, and Wagner in particular, manifest the Romantic spirit.

Heaston closed with a few tips for those attendees for whom The Flying Dutchman would be their first Wagner opera: listen for the “leitmotifs,” or themes; listen to how they change; and “just go with [the music] and immerse yourself in the world of it… When you listen to Wagner, you start to peel back all the pieces of the music, and just when you think you’ve peeled back all of them, there are more.”

The Flying Dutchman opens July 6 and runs through August 24. We hope you’ll join us.

The seminar’s fourth and final installment takes place tonight at 7:00 p.m. at the Star Theater in Cherry Valley. Passions, the double-bill of Pergolesi’s Stabat Mater and Lang’s the little match girl passion, will be the subject of discussion. Speakers will include conductor for the little match girl passion David Moody and Glimmerglass Festival’s dramaturg, Kelley Rourke.

The Star Theater is located at 44 Main Street in Cherry Valley.  There is accessible parking/entrance at the rear of the theater.  That parking area can be entered from Wall Street.

If last week was any indication, it should be a stimulating event.