You may have been wondering to what sort of “shenanigans,” I was referring in my last post. Well, wonder no more. I give you: Junk Set Wars!

(In an announcer’s voice) At last the time has come, the annual showdown of creative, yet functional, prowess between the Carpentry Department (aka the “Carps”) and the Properties Department (aka “Props”).

IT’S TIME for two rounds in the heavyweight division of the Glimmerglass Festival scene shop that will decide the undisputed Junk Set Wars champion of the opera world.

FIGHTING out of the blue corner: the defending champion, the Props Team (boo).

FIGHTING out of the red corner: hailing from the land of Awesome, the Carps Team (boo-YAH).

Welcome to the Thunderdome ladies and gentlemen. Two sets enter, one set leaves.

In the annual “Junk Set Wars” competition, the carpentry shop and the prop shop battle it out. The two teams use pieces of scenery that have been cut from shows (or “junked”) and put them together to create a device that can complete given challenges.

What are these challenges? (Off: What?)

Hush, and Clopin will tell you. The challenges differ year to year and are not revealed until the day of the competition (this ensures that neither team has a head start).

Our challenge was to create two mechanisms that would throw discs of different sizes. The first mechanism, designed for speed, needed to throw 10 discs, about 2-3 inches in diameter, more than 15 feet.

The second mechanism, designed for accuracy, needed to throw a full-size Frisbee to a target 50 feet away. Sets are judged by how well they perform in the challenges and by their aesthetic appeal.

As with any creative process, we went through a good deal of trial and error; we went through a few variations of launch mechanisms that didn’t work before settling on a plan. If you’ve ever shot trap (a sport where clay disks, or “pigeons,” are slung up into the air for you to shoot), you have an idea of what we did. We made two lever arms, one for the small disks, one for the large disk. Both were hand-operated but tensioned with a bungee cord. The bungee cord removed human error and inconsistency, allowing for greater accuracy and precision, which served us well in the second round with the Frisbee.

Since this was a competition, I really don’t know much about our opponent’s process or design. I just know that we saw them build and scrap about six mechanisms. Also, they totally stole our idea. That said, I welcome any challenges from Props. (Hey, I just call ’em like I see ’em.)

To thematically unite our design, we created a miniaturized Dutchman sweep made out of pallet wood used for the Pavilion shows, with a hatch in the front for the small disk shooter. We used the scrapped baluster railings and newel posts (grr) from Passions to support our large disk shooter. We also had a large mast reminiscent of one of the banners from Camelot and a pirate flag, ‘cause why not. All of it was painted to look like waterlogged ship wood. 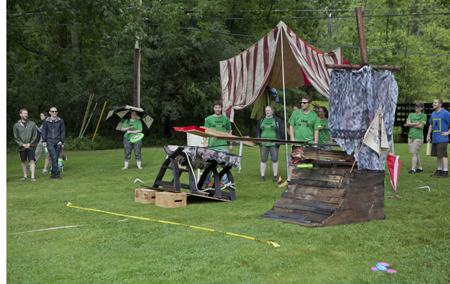 Needless to say, we won quite a few style points.

Our opponents created a table out of cut Camelot chairs, to which they added gold coins and treasure from Dutchman. They put in little figurines from Passions and created a tented pavilion reminiscent of Camelot for the judges, from which they would’ve provided refreshments (#bribes) to the judges, if not for the rain. They also used a cut picture frame from King for a Day to display their team name and whatnot.

But all their fancy tricks and attempts at flattery were for naught in the face of our overwhelming device. In the end, they had no discs across the 15-foot mark, while we had a whole pile in about 25 seconds.

Likewise in the accuracy competition, we hit two bonus targets worth 50 points apiece, and their device didn’t make a single mark. Remember, though, if the judges had been more impressed with their theme and creativity, it still could’ve gone to them. But, luck was with us that day, and after deliberation, the judges awarded the coveted “Golden Monkey Wrench” to Team Carps.

And there was much rejoicing (yay).

Despite some rain, it was a fun day, and a great way to celebrate the successful opening of all the shows, wrap up the work contracts for most of the Carps and Props and promote overall company bonding (aww aren’t we cute). See you next time folks.