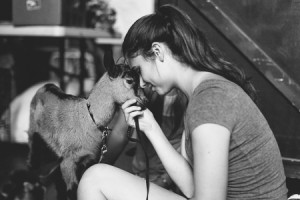 Chopin, a young but promising performer, will scamper into the limelight next month with the July 19 opening of Ariadne in Naxos. Just weeks old, the Oberhasli goat will share the stage with performers several years older than him, even though he still drinks from a bottle. His acting career would be impossible, however, without the guidance of his trainer, Avery Schneider.

Schneider returns to the 2014 Glimmerglass Festival with another four-legged friend after sharing her goat training expertise in the 2011 Glimmerglass production of Annie Get Your Gun. Raised on a small farm in Cherry Valley, New York, she left Cherry Valley-Springfield Central High School last year at the age of 16 to attend SUNY Cobleskill, where she continues to study animal science and behavior.

Along with goat wrangler Mia Horvath, Schneider has been rehearsing with Chopin and his fellow “kid” actor, Jazzy, to prepare the two for their acting debuts. Jazzy, a Nigerian dwarf goat, was born May 1 and is of a miniature breed. Chopin, however, will continue to grow — a goat of his breed typically reaches around 150 pounds. Both goats are used for dairy. 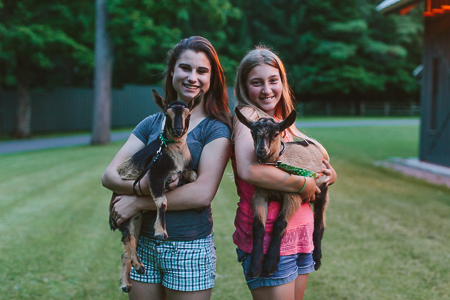 Here is our Q&A with Schneider:

Has your family always raised animals? My family has always raised an assortment of animals. I started my goat herd when I was 11. Currently we have cows, goats, geese, a donkey and a horse. We also have cats, dogs, and a few other small pets in the house.

Are you in FFA or 4-H? If so, how has this helped in training Chopin? I am a member of 4-H, and currently president of my club, Otsego Dairy Goats. I was first involved in 4-H with dog training. I attended many agility and obedience classes with my dogs, and I am able to use very similar techniques when working with my goats.

What steps did you take to train Chopin? As soon as he was born, I handled him a lot and brought him into the house. I got him used to riding in the car, and going to new and different places. Some animals have trouble and get nervous when they get in the car in one environment and then get out in a completely different place. I spent a lot of time working on that with Chopin. I needed to get him used to loud noises, new smells and lots of people, so we spent many hours on the porch of The Rose and Kettle restaurant in Cherry Valley.

How did you learn how to train a goat for theater? I have had a goat in a Glimmerglass production before: my goat Nigel was in Annie Get Your Gun. I found the most important thing was to bring the goats to many different places so they experience lots of sounds, smells and surfaces. Because I spend so much time with the goats, they use me as their comfort zone in the new and complex environment of the theater. 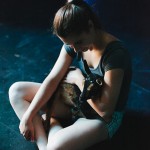 Why did you name him “Chopin”? The names of all of my goats derive from the names of their mothers, so each family has a theme. Every year my goat Oreo’s babies are given cookie names. Chopin’s family has all Polish names. His mother’s name is Koza, which means “goat” in Polish. Because he was going to be in the opera, we wanted to give him a Polish name and a musical name – so I thought naming him for the Polish pianist Chopin would be fitting. Besides, Chopin the musician was a child prodigy, and Chopin the goat is making his stage debut when he’s less than a month old! He has even been known to play the piano in our living room, using all four hooves.

What are your other hobbies / talents? I enjoy riding horses, working with dogs, and showing my goats at local shows. I have experience working alongside a vet, where I have learned to perform minor surgeries. I enjoy caring for newborn goats and calves and assisting with their births. I have worked in the barn at the Beekman Farm, caring for kids with John Hall. I have also worked at a local dairy farm, where I milk cows and care for calves. This year I was selected to be a Junior Dairy Leader of New York State, and attended the 2013 National Dairy Conference. In my spare time, I have been known to play the bass guitar.

What do you want to do when you’re finished with school? I want to keep working with animals, either large farm animals or exotics. I’m thinking about building on my experience with Chopin by working professionally with animals in entertainment.

What is the most interesting you’ve learned while working with Chopin around the Glimmerglass campus this summer? I really enjoy experiencing the intersection of two different worlds that don’t usually meet: the world of livestock and the world of professional opera. I like being the bridge between them at Glimmerglass this summer.

If you could train any kind of animal (not including goats), what would it be? I am interested in training working dogs, especially police and military dogs that work in search and rescue. I would also like to work with exotic animals, such as large cats and primates, in the entertainment business. 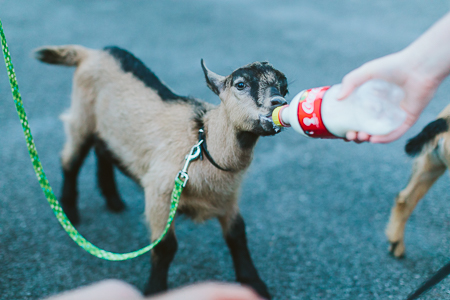