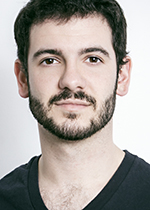 Though he calls Iowa home, Chris Carr will find a new one on the Glimmerglass stage this summer as he understudies the lead role of Billy Bigelow in Carousel.  Carr will perform the role in performances on August 12 and 19. In the meantime, the baritone will appear as the Imperial Commissioner in Madame Butterfly.
After his summer here, Carr will perform the title role in the Arizona Opera’s 2015 production of Eugene Onegin, where he has made appearances as Dr. Malatesta in Don Pasquale and Schaunard in La bohème. His other recent roles include Tarquinius in The Rape of Lucretia at the Merola Opera Program, Pish-Tush in The Mikado at Lyric of Kansas City and Schaunard in La Bohème at Central City Opera. Carr also sang the role of Le Mari in his home state with Des Moines Metro Opera’s production of Les mamelles de Tirésias.

Here is our Quick Q&A with Chris Carr:

What has been your favorite role so far and why? Either Tarquinius or Don Giovanni. Playing a villain is always a challenge. Trying to understand the character and bring the darker side of them to life is not always easy, but is extremely rewarding if you succeed.

What is your dream role? Pelléas in Pelléas et Mélisande. I would love to get a chance to fit my voice into that score; the music is so unique and just stunning.

Is your family involved in the arts as well and how? My mother used to sing musical theater when she was my age and my sister has a degree in voice as well, but I am the only professional musician in the family

Are there any artists you feel particularly inspired by? Piero Cappuccilli and Simon Keenlyside are my two biggest inspirations as a baritone.

What do you sing or listen to for fun? I am a big fan of jazz, which is actually how I got my start in music. I also love good folk / bluegrass music as well.

What are your interests or hobbies? I like to do just about everything, from video games to CrossFit. Reading, whittling, cooking, the list goes on.

If you hadn’t become a singer, you would have: I would have been a saxophone player, possibly a teacher. I loved jazz and playing the sax was my first life as a musician.

Any hidden talents? I’d say I’m a fairly talented cook. I also rode horses all the way through my childhood.

One thing you can’t live without: A job. I get crazy when I’m not busy.

What are you most looking forward to at the 2014 Glimmerglass Festival? My performances as Billy Bigelow. I’ve never done a role like that before and I just can’t wait to get on stage. I am looking forward to the challenges of this summer. Billy Bigelow is the first romantic lead I’ve ever sung, his character is such an icon for American musical theater and getting to play him is just one of the more exciting prospects I’ve ever had. I’m excited to take a huge step forward in my career and I’m also looking forward to performing in New York for the first time.