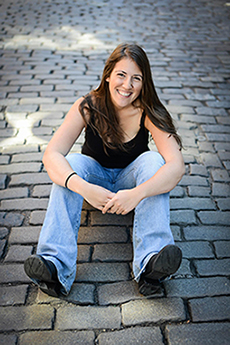 Madeline Sayet will direct a new production of The Magic Flute that takes its inspiration from the natural world and the varied ways humans have interacted with it. In a recent conversation, she reflected on how her background and experiences have influenced her work as a storyteller.

You were raised on traditional Mohegan stories and Shakespeare. How did these two things influence your decision to pursue a career in theater?

The late Mohegan Chief Ralph Sturges told my mother she should respect my decision to work in theatre because it required “great latitude of mind.” That phrase has always stuck with me. As a director, I am liberated and challenged by needing to know what every character is thinking. Both traditional Mohegan stories and Shakespeare plays include their audiences. Engaging with characters directly gives us a portal into their world.

Many of your recent projects deal directly with themes that are closely related to your own identity–as a Mohegan, as a woman, as a human born in America at the end of the 20th century.

Last year I directed two new plays with uncommon protagonists for Amerinda, Inc., an organization that supports Native Artists. Powwow Highway by William S. Yellowrobe Jr. (based on the novel by David Seals) follows a chubby misfit who ultimately saves the day by following his tribe’s traditional ways in the most unlikely of circumstances. Miss Lead, by Mary Kathryn Nagle, features a Native college student whose family won’t speak about their Native identity.

Daughters of Leda came about because neither I nor any of my friends had known that Leda, Helen of Troy, Clytemnestra, Electra and Iphigenia were all one family. In ancient Greek drama these women are usually isolated from each other. So I thought, what happens if we put the family back together? What if we allow them to choose their own destinies and finally tell their side of the stories that have instilled fear of feminine knowledge for far too long?

A prince and princess do not gallop merrily into the sunset without falling in the mud. I’m interested in theater that reflects the messiness of the world we live in. Native voices, women’s voices, millennial voices are all a part of that world.

In addition to telling stories that are so obviously close to your heart, you’ve also taken on stories from other cultures, other times. I’m thinking in particular of your role as director of Amerinda’s Native Shakespeare Ensemble. What does it mean to you to take on Shakespeare plays with a Native company?

The Tempest carried me into directing because of where it lived in time. Europeans were touring Native people around the country for profit, and into that moment swept this beautiful allegory, written by the English language’s greatest writer, featuring an indigenous character. People usually forget the potency of the context in which it was written. At that moment in time, isn’t it important that Shakespeare composed clear intelligent verse for Caliban? How does this context inform a staging of the piece?

Most English speakers have, at some point, formulated an opinion on Shakespeare. What is most indicative of the need for Amerinda’s Shakespeare Ensemble is that when we began, both audience members and actors expected everyone would either be costumed in puffy pants and tights or fringe and feathers.

Since all of us in the Ensemble from different Native nations, we each bring different storytelling traditions with us. One of the biggest goals of that project is to develop a core performing ensemble at Amerinda with its own distinctive way of working.

To what extent is your reading of “The Magic Flute” influenced by your personal background and experiences?

What is today’s enlightenment journey? Ancient sciences like yoga are skyrocketing in popularity. The cacophony in the world is causing many to retreat to older models of understanding. Tamino leaves the city behind and embarks on a journey into the forest, the unknown, where he finds friendship, adventure, love, and ultimately, himself.

There are many worlds in The Magic Flute. Traditionally, in Mohegan culture we are not asked to separate art, religion, and politics the way that modern mainstream American culture does. In the story, the actual object–the magic flute–has the power to transform the world around us. It can change sadness to joy, help the wanderer find their path, bring balance–it belongs to no one but exists in all worlds, weaving them together.

I am a Mohegan, but I am also a millennial, a young woman, living and working in New York City, and so my knowledge and worldview are not limited to my upbringing. I am sure that other Native peoples from the northeast woodlands will have moments that resonate with them in this production, as will young women, as will all audience members torn between a tree stump and an iPhone wondering which is the path to their fulfillment.

What themes have been most important to you as you’ve worked with the creative team for “The Magic Flute” to develop the upcoming Glimmerglass production?

The world around us is full of magic, a term we tend to apply to anything we can’t explain. I think about how scientific experiments and procedures from earlier ages were once deemed magical.

The Queen of the Night’s magic is that of an ancient, natural power, of traditions that are not be questioned. Sarastro’s power comes from codifying knowledge, analyzing the world. Just as darkness and light cannot be understood in isolation from one another, neither of these two ways of engaging with the world can stand alone. Tamino and Pamina find themselves being tugged between two forces. They each must choose a side, or find a way to live with both.

Our Magic Flute is a coming of age story for both Tamino and Pamina as they inherit and learn to live in a broken world. How do we see balance between men and women, innovation and tradition today? How do we find and relate to our communities in way that makes each of us better? And how do we maintain our sense of wonder at the unknown?

Those questions actually feel very universal, very contemporary to me. Inspired by the beauty of the woodlands, in which Glimmerglass makes its home, ours is a Magic Flute for today’s audiences. And that is what I am most thrilled about.