It’s impossible to put on an operatic version of The Crucible and not directly compare it to Arthur Miller’s timeless play. Directing this opera for the first time raises many questions for me. I love everything Arthur Miller ever wrote and his plays are embedded in my subconscious, but working with the story in the musical setting really makes you think about the text and situations – it allows you to think about them differently.

As the designers and I were crafting the production, we decided to visually set the opera in the original 1692 Salem. Ultimately, it was felt that the story will seem most shocking in its original setting. The fact that this trial actually occurred, and resulted in the death of innocent men and women, is still shocking today. It should open our eyes to our current climate, where we are quick to accept opinions as truths because of the highly-connected world we live in.

We researched the time period extensively to get the production as authentic as possible. The Puritans were very stark and stolid, so the set, though large and impressive, is muted in color. The same applies to the costumes. 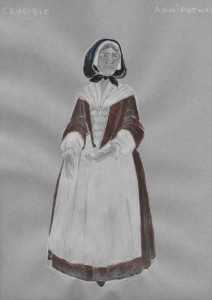 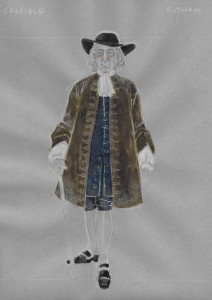 I’ve also researched the daily life for the Puritans in the late 1600s. Cornmeal, a dietary staple, was eaten daily. Unfortunately, like the rest of Puritan life, it was pretty bland. I’ve created a recipe that I’ve jazzed up, and though not as authentic, is a lot more delicious than it was in the settlers’ times. Subscribe to my Traveling iPad emails to get the recipe in the coming weeks.