Rachael Powles is an incoming junior at Sauquoit Valley High School, where she is co-editor of her school newspaper as well as an active member of the drama club. This is her first production with The Glimmerglass Festival.

We had come a long way since that first night at the Springfield Community Center, when we dreamed of the day we would be allowed to show the world the glory of opera. After weeks of fantasizing together, for our hesitant interactions had solidified into full-blown friendships, opening night of La bohème was upon us. As we gathered on the Wardrobe House porch at the center of the Glimmerglass campus, there was a hushed excitement in the air. Amid the shouts of “Happy Opening!” an unspoken tension descended upon youth chorus members and Young Artists alike. After working together for so long, we knew what we were capable of, and wanted no one to see less than our best.

The conflicting feelings followed us up to the dressing room. We scrambled into our petticoats, dresses and coats, the first step of entering the whirlwind world of 19th-century Paris. Opening night, I discovered, also means gifts. La bohème’s costume designer presented each of us with a copy of his original sketches for our outfits. Our chorus master, who has been with us since the first music rehearsal, gave each of us kids an orange rose, which symbolizes enthusiasm and congratulations. Other girls in the dressing room received candy and cards from family members who had crossed the country to see them tonight.

In the pocket of my apron, I kept a lucky penny I found on our first day at the theater. I held it fondly while we warmed up our voices around a piano as we’d done so many times before. Tonight, all our hard work would come to fruition. Tonight, we would show everyone what we had learned.

The rain was picking up as we made our way backstage. I traveled through the dark corridors and staircases that snake beneath the opera house. At one point I found myself directly beneath the stage. I could hear the four bohemians dancing above me, their voices echoing throughout the massive theater. Again, it struck me how lucky I was to be part of this production, a cog in the machine that, after many weeks of trial and error, was finally running smoothly. The backstage area looked just as it always had. Stagehands hunched over scores, muttering into headsets. Dancers stretching despite being confined to corsets. Tables and chairs waited in the wings to be moved into position. I swallowed the ball of anxiety that had formed in my throat and gave my lucky penny a squeeze.

“Stand by, ladies,” a stagehand instructed as the lights faded to black.

The music swelled around us. No time left to fret. We threw ourselves into the scene. 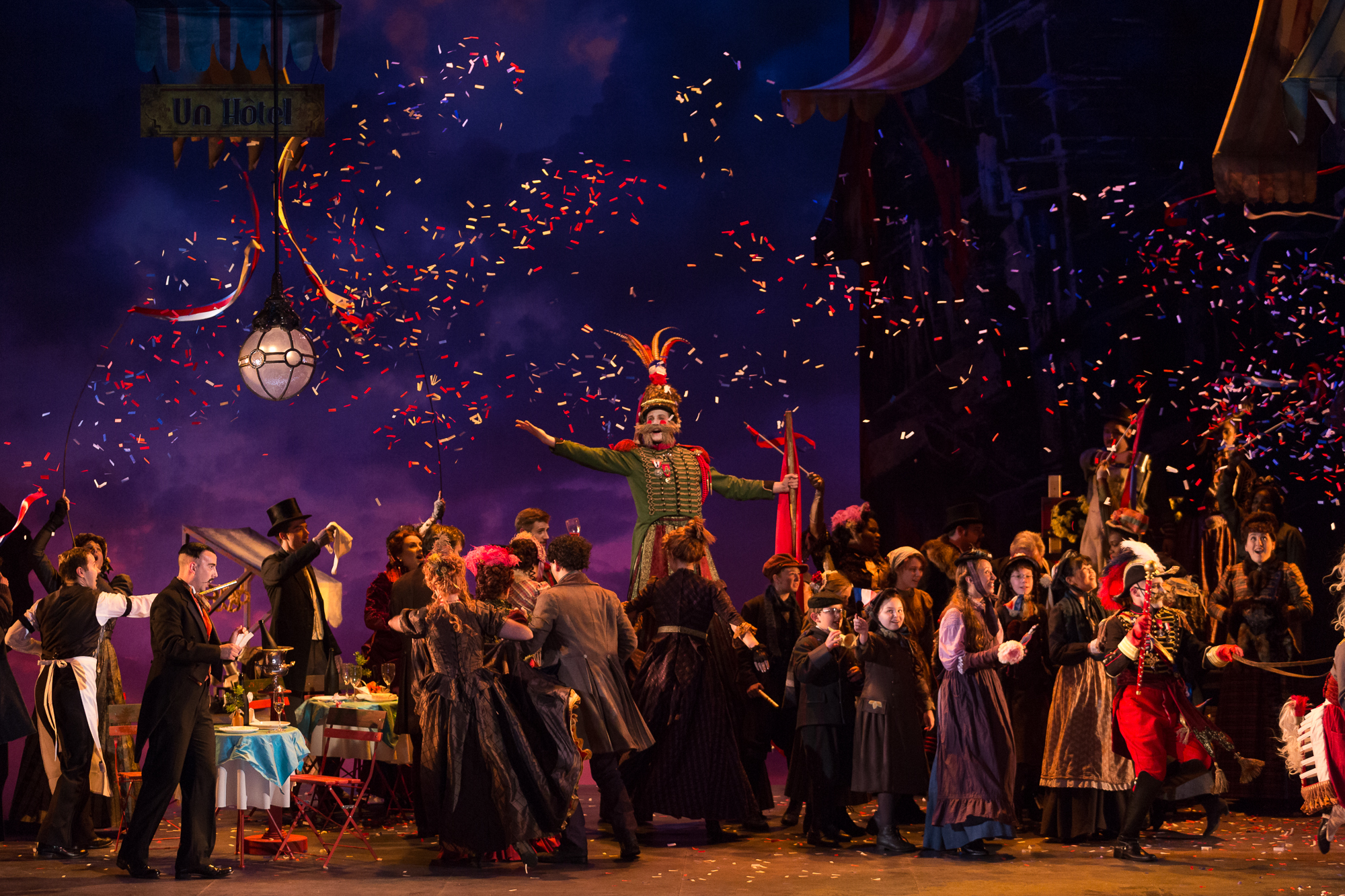 Performing live has a way of bending your perception of time. A minute can last a week, anhour can last a second. I lost myself in the color and excitement of the scene. I forgot the sweltering heat and the sound of the rain drumming on the roof. In my mind, and in the minds of the audience, it really was Christmas Eve in Paris. As soon as it began, it was over. The curtain fell as we waved to the applauding crowd. The work lights flicked on backstage, and we filed out of the theater. We couldn’t wipe the smiles off our faces. Once again, I was filled with euphoria as we made the long trek back to the car. It was better than I ever could have imagined. I knew in that moment that this night would stick with me forever. One show down, I said to myself, eleven to go.