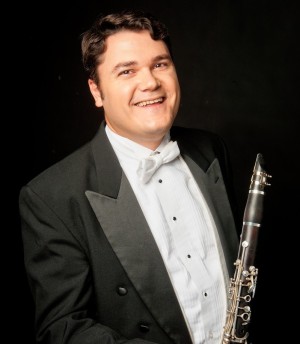 Pascal Archer is The Glimmerglass Festival Orchestra’s new principal clarinetist after a season serving as acting principal in 2016. Outside of Glimmerglass, he is the founder and artistic director of the Exponential Ensemble, a mixed chamber music ensemble creating interactive music educational programs connecting music with math, science and literacy.

At the beginning of the final scene of Part One of Donizetti’s The Siege of Calais the clarinet has a prominent concerto-like solo that represents the character Aurelio at first peacefully asleep after his ordeal in scene one, but this peace gives way to a dream of the destruction of the city of Calais and the execution of his son by English soldiers. We recently had the opportunity to speak with Pascal for this Q&A.

Could you take us through the process of developing your interpretation of the solo from when you first received the music for The Siege of Calais to performing it in the pit?
Even before I get the music from our librarian, I always put together a playlist of all the operas I have to learn during the summer. That way I can familiarize myself with the repertoire ahead of time and identify which parts of each opera might need more attention. In the case of the Donizetti, an opera that we are doing for the first time in the U.S., I had no idea that it featured a huge clarinet solo! I recall sitting on the subway the first time I heard the solo, I got distracted and missed my stop! I absolutely love bel canto and this solo is such a great opportunity to explore that genre. Over the years I have listened to many recordings of famous singers performing different bel canto arias so I already had some ideas for phrasing. Listening to Leah and Aleks perform their duo in rehearsal also inspired me very much. This solo really shows the wide range of the clarinet and its singing qualities. Also, just like a coloratura soprano would do, it involves virtuosic elements with fast scales and large leaps all over the place. It’s a lot of fun to play and I’m very much looking forward to performing this opera.

What else are you looking forward to in your second season at Glimmerglass?
Porgy and Bess has an amazing clarinet part as well. I really like jazz and Gershwin is one of my all-time favorite composers! I’m having a lot of fun with it.

What is one of your favorite orchestral solos in the clarinet repertoire?
Since we are talking about opera, another amazing clarinet solo is the prelude to Act 3 in Verdi’s La Forza del Destino.

Which operas are you performing in this year?
In addition to the Donizetti and Gershwin, I’m performing in Oklahoma! Unfortunately, Xerxes doesn’t have clarinet since the instrument wasn’t fully developed in the Baroque era.

On a more personal note, what drew you to the clarinet?
When I was in middle school I tried different wind instruments in music class and, although I really wanted to play the flute, the clarinet worked immediately. I often tell my students that it’s like in Harry Potter; it’s the wand that chooses you!

Do you play any other instruments?
I started my musical training on piano. I also play bass clarinet and piccolo clarinet.

What’s an interest or hobby of yours?
I love to cook and have people over for dinner. I also love to go out and try new restaurants. My partner owns a Mexican restaurant in New York City called “La Loteria,” and you will find me there often, especially on Taco Tuesdays!

Tell us about one of your favorite places in Cooperstown.
I love walking on the grounds of the Otesaga Hotel. It’s such a beautiful place overlooking the lake.  Also, I recently discovered the Cooperstown Distillery.