The 2017 season of The Glimmerglass Festival has explored the theme of homeland and how people react when their homeland is threatened. But in Handel’s Xerxes, normality is disrupted not through warfare or outsiders, but through a series of manipulations and misunderstandings. The collapse and restoration of order is demonstrated through symbolism in the opera’s design, symbolism that can help us answer the question at its heart: how did such a peaceful place dissolve into such disarray. 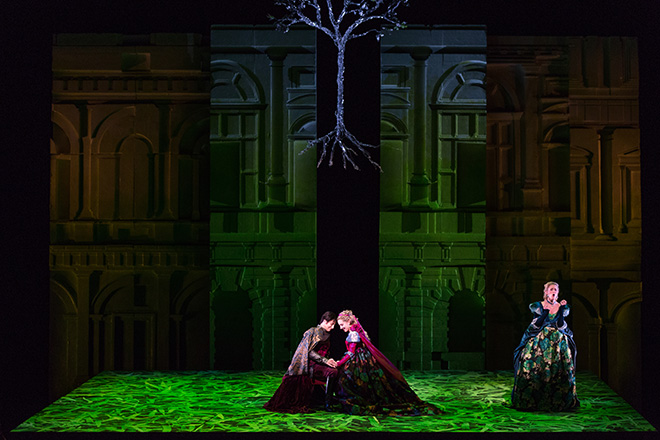 In Xerxes peace is precious, and throughout the opera we as an audience are aware that chaos can erupt at any time. An unstable tyrant, King Xerxes rules his empire through intimidation, and his subjects must tread carefully to avoid his wrath. After hearing the princess Romilda’s voice from afar, the king believes he is entitled to the stranger, in spite of social expectations and the fact that she is the lover of his brother Arsamenes. To make matters worse, the maiden Atalanta longs to have Arsamenes for herself and is happy to deceive anyone who stands in her way. 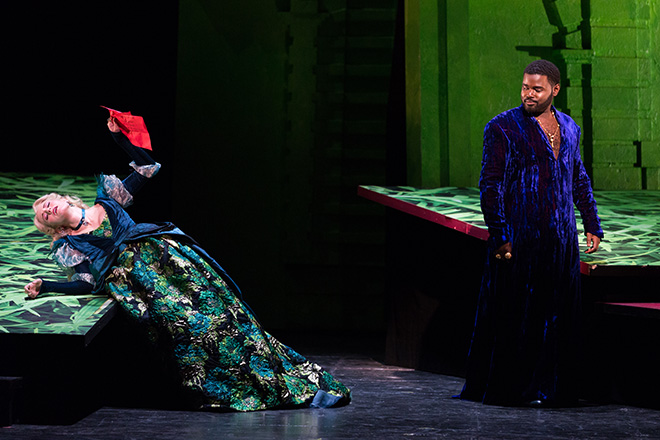 One of the first pieces of the set we glimpse is the plane tree, which the king claims to love with all his heart, suspended above the actors. Its silver branches reach to the heavens, like fragile icicles that could shatter at the slightest touch. But as Arsamenes sings, “The mightiest oak is vulnerable to an earthquake”; the tree dangles precariously as the lovers’ feuds intensify, glowing a fiery red. In the brief moments when peace is restored, the tree glistens delicately once again, intact but in new positions. 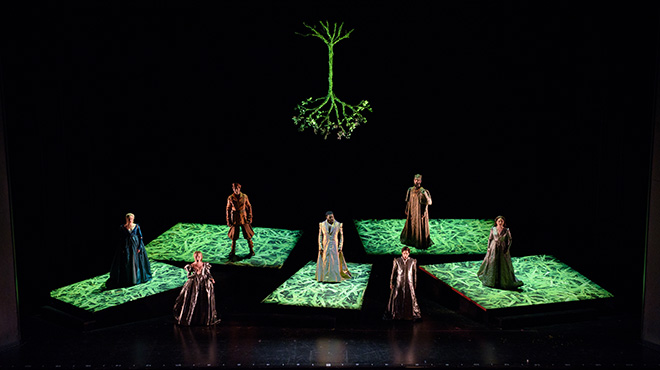 Color also plays a hand in the establishing a juxtaposition between calm and calamity. Red serves as both the color of passion and chaos, ideas that are closely intertwined in Xerxes. Before the curtain rises, we find ourselves facing a red banner that bears the opera’s title; when King Xerxes himself makes his first entrance, he is decked in royal red robes. The love letter Atalanta intercepts is in a red envelope, and in Act 2 Romilda changes into a red gown, symbolizing her status as both a source of anger and love. By the final scene, the entire stage is engulfed in red light, the green of peacetime all but forgotten. 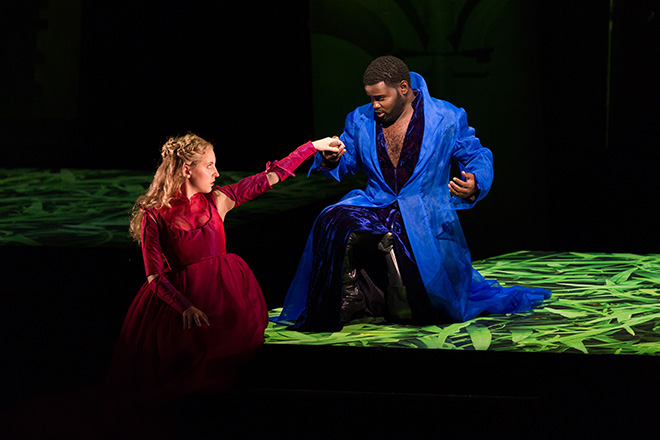 For me the question at the heart of the opera is who is to blame for the initial collapse of peace. Some conflict is caused by deliberate action, such as when Xerxes exiles Arsamenes, but other situations are brought on by chance. For example, it is purely coincidence that Atalanta intercepts the lovers’ notes, but her choice to twist their words motivates even more unnecessary conflict. So who is to blame? Is it Arsamenes for refusing to yield Romilda to Xerxes, or Romilda for resisting the King’s advances? Perhaps the blame lies with King Xerxes himself for letting his lust prevail over his reason. Ultimately it is up to the audience to decide, but this is my take:

The characters in Xerxes are undone by bad luck, but it is their actions that lead to peace being restored.