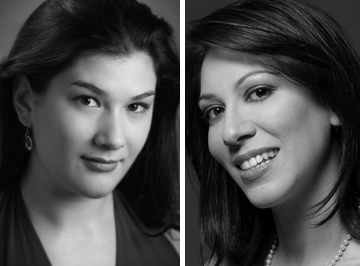 Curious about the 2010 Young American Artists Program? Well, on April 15, you’ll have the chance to hear two members perform – before they even begin their summer residence. Soprano Eleni Calenos and mezzo-soprano Annie Rosen will sing at The Otesaga Resort Hotel’s 2010 Open House on Thursday, April 15, at 6 p.m. The open house is free and open to the public.

Calenos received a Master’s in Vocal Performance from Queens College and a performance certificate from the Opera Institute of Boston University. This summer she will understudy the role the Countess in Glimmerglass Opera’s production of The Marriage of Figaro. Calenos has performed at the Barbados Music Festival, Boston Concert Opera, Boston University Opera Institute, Chorus Pro Musica, Harrisburg Opera Association, Hellenic Foundation and Opera in the Heights.

Rosen received a Bachelor of Arts in Music from Yale College and is completing her Master of Music at Mannes College. Rosen will understudy the role of Alessandro in Tolomeo and appear in the chorus of Tosca during Glimmerglass Opera’s 2010 Festival.  She has performed with Ensemble enCANTA, Mannes Opera, Yale Cabaret and Yale Institute of Sacred Music. Rosen has been a Studio Artist at Opera North in New Hampshire and was a 2008 recipient of the Louis Sudler Prize for Excellence in the Arts at Yale College.

The Otesaga’s open house will start at 4:30 p.m. and end at 6:30 p.m.  The performance will be in the ballroom at 6 p.m. Light refreshments will be served and no reservation is necessary.

A complete list of 2010 Young American Artists will be released shortly.