First and foremost — THANK YOU!
I want to extend our heartfelt thanks to everyone who helped make 2012 a success. During our end-of-year fund drive I spoke to many of you while I was in rehearsals in Houston and at the Met. As we are closing the books on 2012, it appears that for the second year in a row Glimmerglass has operated in the black. I am extremely proud and grateful to all who helped get us there. Along with this achievement, it was great fun for me to speak personally with so many of you during our phone/e-mail campaign. I learned a lot about what you care about!

GREETINGS FROM 35,000 FEET. I started this en route to China over the Bering Strait. I left Houston at 4:30 a.m. on Friday for snowy Beijing, where I am directing a new production of The Tales of Hoffmann at the National Center for the Performing Arts, also known as the Egg. I shared my pre-production sightseeing visit there with you in October, but check out their website where you can also see this amazing theater, designed by Jean Nouvel, situated next to Tiananmen Square.

Thank you again for helping make 2012 a success. Together, we can reprise this achievement in 2013! 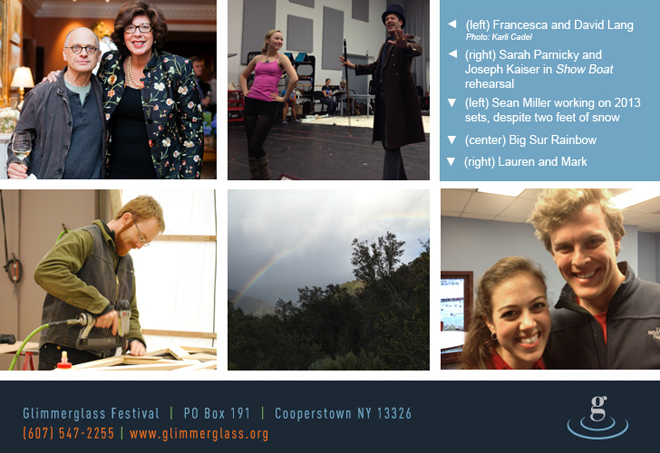