On Trac |< is a dance piece commissioned by The Glimmerglass Festival that looks at the intersection of human and machine in rural America. In this interview, On Trac |< composer Nicolas Lell Benavides and choreographer and performer Amanda Castro provide insight on the piece and explain what inspired the creation of the film premiering August 1, 2022.

What made you want to create art about the importance of farming communities; what was your inspiration for this piece?

Nick
In 2019, as a young artist composer with The Glimmerglass Festival, I was living in this charming house up the road in Cherry Valley on the other side of the lake. Every day I would descend from the hill to get to the main road, and on one of my last days there were literally hundreds of tractors dotting the fields, as though they sprouted like wildflowers after a heavy rain. After months of green fields and grazing cows, it was quite a shock! It turns out there is an annual tractor festival in Cherry Valley of all places. We imagine these large outdoor spaces as wild and full of animals and life, but they are also full of working machines that cultivate the land and feed us. Later that day I met with Francesca Zambello and told her about how this image sent my head spinning, and she asked me to respond to it by writing a piece.

Amanda
This project was initiated by Francesca Zambello to Nick Benevides many moons ago with an original request to compose an opera about tractors. I was invited in as a Choreographer to investigate the task further. In our initial conversations about land, and speaking about the importance of tractors to this farming community, I kept having the recurring question, “But what about the people?” The machinery that tills the land to give us the nourishment that sustains us from day to day is run by one thing and one thing only, the people. Tractors are machines based and created off of thousands of years of hard, sweat-filled agricultural labor. The people were the inspiration. The voices, movement, and testimonies of the community here in the Cooperstown area served as the foundational inspiration to this work.

Were there other styles/works you drew inspiration from?

Nick
This is one of those pieces where I really wear my influences on my sleeve! When the pandemic struck and I learned I could no longer write for a full orchestra, I decided instead to dive into electronic music and recorded sound.  Soon after, Amanda and I were sent to Cooperstown to record interviews with people who worked the land, and record their machines, animals, and whatever else we heard. We learned more about how people see themselves as stewards for the land, and importantly we learned about their biggest fears about what might become of the land in the future. The interviews were so powerful I ended up using snippets in the music itself. I grew up with a tractor in New Mexico, helping my dad care for his land, so you can say I was predisposed. 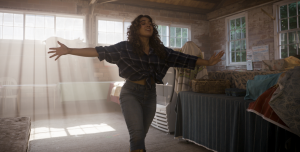 Amanda
I am a performer that believes movement is directly aligned with healing and not just performance. I drew inspiration from my experience as an American-Puerto Rican artist and from the literal physical movement of the people here in Cooperstown. A question I (and my community) are usually faced with is: “How do I exist in performative spaces and show that I’m more than just my body for audiences to clap at? How do I convince them that I too, am a person with basic human needs?” This is in the ask of practically every marginalized community when they are contributing to society’s well-being. That being said, it runs parallel to the testimonies here in upstate New York of some local farmers. “How do we convince people that we aren’t just turning a profit to serve food to our customers but are deeply dedicated to keeping this land in its wild or agricultural state?” Every motion from the swipe of the arm cleaning the farmers market table, to the bend of the knees picking up a crate of fresh produce, to the deep embrace of a fellow farmer before the market opens, is all movement research that lives within On Trac|<. Again, this work was truly inspired by these community members.

How do you feel music and dance helps convey your message? 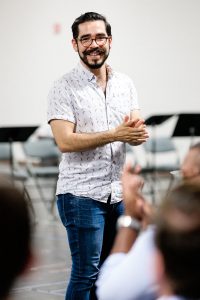 Nick
I love working with a choreographer. Amanda and I both practice art forms that are inherently amorphous – we cannot always convey a concrete idea with pure music or pure movement. Everything Amanda and I do requires some form of interpretation. The concrete information comes from the interviews, from the generous individuals who told us their stories, and Amanda and I jointly give their voices context. It’s also important to note that the glue that binds all of this together is our incredible videographer Lucas Godlewski! He helped bring our dream to life by assembling what has to be dozens of hours of footage, and he’s spent an insane amount of time presenting this piece in the best light possible.

Amanda
Dance is a universal language and I believe it is the perfect language for this message. The message of On Trac |< is to show that we are all connected. Music and dance provide another two languages that allow this story to reach more audiences.

This piece was originally commissioned to be performed live on stage. What has it been like taking the work into a virtual space? How did that adjust your vision for the piece?

Nick
When the pandemic hit everything was new. Disruption is stressful but it can also be an
opportunity. At the core we as artists are charged with the responsibility of finding ways to
be creative no matter the circumstances. Thankfully, I think the piece is even more meaningful now that we took the time to incorporate real sounds from voices, machines, and orchestras, as well as real places via the film from the Cooperstown area. We decided to make something that not only uses a digital medium but demands it as part of the presentation. This piece kicked off a new creative outlet for me and gave me a skillset to draw from that will change how I write.

Amanda
Being able to put this work into a virtual space opened a whole new host of opportunities. With this opportunity to create a short film with the help of Lucas Godlewski behind the lens, it has provided a space to share with audiences far and wide what the texture of the earth looks like right here in upstate New York. 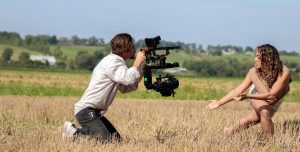 How did you work together to accommodate each other’s visions?

Nick
It was a match made in heaven, thanks to Francesca’s vision! Amanda and I were at The
Glimmerglass Festival during different summer seasons, so we would have never otherwise met for something like this. I think we’ve become good friends at this point, and Amanda, Lucas, and I hope to do another project like this down the road (hint hint!)

What is the most important thing you want the audience to take away from this piece?

Nick
I’ll give you one of my favorite quotes from the piece:
“What better gift than land?”

Lastly, considering our day-to-day practices from nourishment to fulfillment,  I want people to ask themselves, are we making the best choices for a better tomorrow?

I want people to ask themselves “Are we on track?”

One Thought on “Amanda and Nick talk On Trac|<”